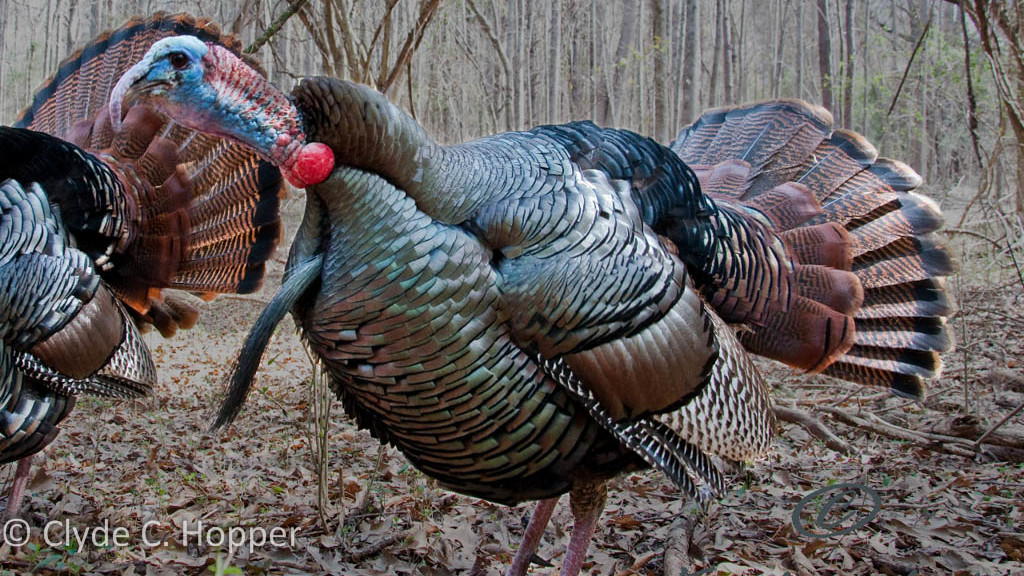 Without controls on hunting, the eastern wild turkey was hunted to near extinction by the beginning of the 1900s. Their lowest numbers were between 1900 and 1930. However, it wasn’t until the 1960s that restoration attempts were made. This restoration was a huge success and 1991 saw the first wild turkey hunting season open up in all states with wild turkey populations.

In post-colonial times the turkey is held in a high place in American history, although this emphasis on its importance is misplaced. Despite popular misconceptions, the wild turkey was not the central piece of the first Thanksgiving dinner and was not even a part of traditional Thanksgiving meals until the 1800s. It is also said that Benjamin Franklin had a fondness for the eastern wild turkey and even favored it to the bald eagle as the symbol of America.

The eastern wild turkey is a large bird. The male, known as the tom, generally weighs between 18 and 24 pounds and can be as tall as 4 feet. The female, or hen, can grow nearly as tall as the male, but only weighs around 10 pounds. The primary color of the turkey is an iridescent bronze, which is darker in the male and lighter in the female. Males have a fan-shaped tail and these and the wings on both male and female have alternating dark and light bands. The male’s head is reddish in color and the female’s head is blue. The male has a number of red fleshy growths around the head, including the snood (above the bill), the caruncles (on the sides and front of the neck), and the dewlap (under the chin). In addition, all males and 10% of females have a beard that hangs from their chest and males have spurs on their lower legs that range in length from 1/4 to 1-1/4 inches.

The habitat of the eastern wild turkey covers much of North America, including five Canadian provinces and 38 U.S. states. Within this area the mature bird has a three main predators: coyotes, foxes, and fishers. They can be found inhabiting hardwood, pine, and mixed forests and find open pastures, hay fields, clear cut areas, burnt areas, and savannahs that are grassy and provide a constant supply of food in the form of plant life and insects. This type of environment also provides significant ground cover when needed, in the form of low-lying plants.

Eastern wild turkeys do not hold to a territory. Instead they range far and wide and in the summer can cover between four and five square miles. During the winter and when roosting season arrives their movements are much more restricted and they tend to stick to 100-200 acres of land. Their main source of food is found in cherries, beechnuts, acorns, and ash seeds and in the summer they also eat insects, seeds, grass, sedges, and berries. Poults, the young turkeys, eat primarily insects, but 90% of the mature turkey’s diet is plant-based, with the remaining 10% being insects. When available, turkeys can also eat grains such as corn, rye, and oats, as well as soybeans, buckwheat, millet, and alfalfa.

The eastern wild turkey is one of the most hunted wild birds and is the most challenging to hunt as it has very keen hearing and sharp eyesight. For this reason, the most common way to lure in their prey is for hunters to mimic the call of the hen. It is important for hunters to know the various calls of the wild turkey so that they can use the right one at the right time. The eastern wild turkey and all other subspecies have a range of 28 calls and each one conveys a specific message. These calls include cutts, clucks, purrs, gobbles, rattles, yelps, kee-kees, and cackles.

Eastern wild turkeys generally move about in flocks, foraging for food as they go and they are active during the day, roosting in low bushes and shrubs through the night. Hens can and do breed in their first year of life, producing between 8 and 15 eggs per season. The toms attract a number of females by gobbling, which also warns other males to stay away. Mating occurs in April and the eggs are laid in May in a nest that is nothing more than a shallow depression in the ground that is lined with dead leaves. The incubation period is 28 days and in June the poults hatch. Males do not generally mate in their first year, when they are known as jakes, as the mature turkeys tend to win the females.