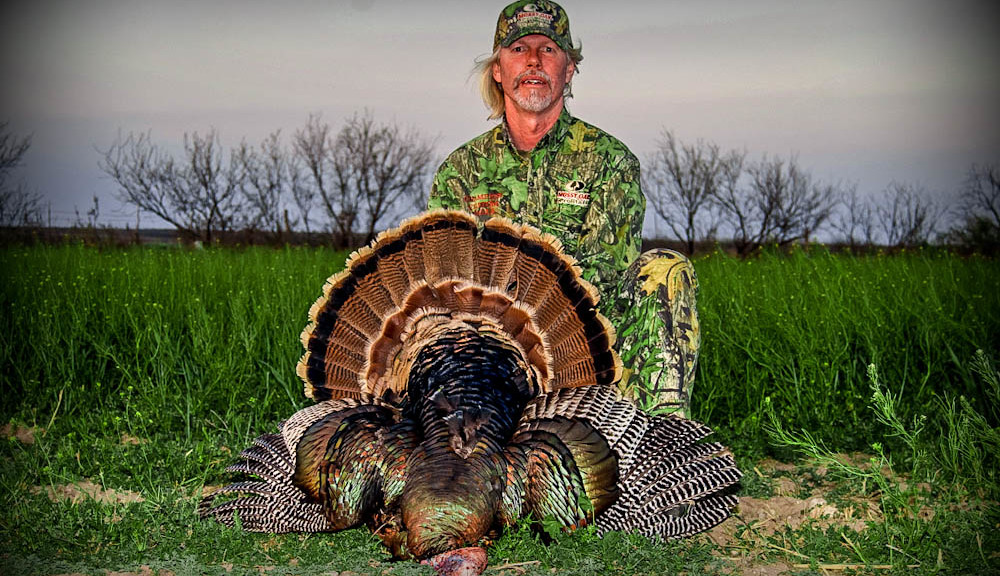 The Rio Grande wild turkey (Meleagris gallopavo intermedia) was traditionally found in the central plains of the U.S., particularly in Kansas, Oklahoma, and Texas, and its population numbers over 1,000,000. The bird was named after the river Rio Grande, near which it lives. George B. Sennett was the first to describe the Rio Grande wild turkey in 1879 and he noticed that it looked as if it were a cross between the eastern wild turkey to the east and the Merriam’s wild turkey to the west. In fact, this is where the scientific name intermedia was derived.

The Rio Grande wild turkey looks much like the other subspecies of wild turkeys and can measure up to four feet tall, but they have exceptionally long legs and are quite pale in color, with copper being the dominant hue. They have tail feathers and rump and tail coverts that are yellow-, tan-, or buff-tipped, which is lighter than that of the eastern or Osceola subspecies and darker than those of the Merriam’s wild turkey. The females, known as hens, are similar in appearance and size to the males, known as gobblers or toms, but they are duller and weigh less. The average hen weights about 8-12 pounds, while the average mature tom weighs in at about 20 pounds. As with other subspecies, the males have fleshy growths around the head and neck, including caruncles, snood, and dewlap, as well as a beard on the chest and spurs on the lower legs. Only about 10% of hens have a beard and some may have underdeveloped spurs.

The range of the Rio Grande includes a dramatic shift in climate and amount of rainfall from north to south. In the north (Kansas) they live in a continental climate and in the south (Mexico and Texas) the climate is tropical. The range in rainfall is 15-35 inches per year. The Rio Grande prefers the brush that grows by streams and rivers or forests of pine, mesquite, or scrub oak. In the winter, they prefer to roost in valleys or next to a stream in the tallest tree they can find, no matter the species. If they can’t find a suitable tree, then they are not above using a man-made structure, such as power lines or windmill towers. Males will use their winter roost throughout the year.

These birds tend to have distinct ranges in both summer and winter and are nomadic, traveling as much as 10 miles from where they roost in the winter to where they nest in the spring. They are not well-adapted to open prairies, requiring the cover of wooded areas for protection. However, where those wooded areas encroach upon grassland and water is available, the numbers of the Rio Grande tend to increase. Like the other subspecies, the Rio Grande tends to eat a diet rich in plant life and insects, with insects being the primary food for young turkeys and plant life dominating the diet when they mature.

As with the other subspecies of wild turkeys, the Rio Grande is a popular target for hunters. This bird likes to hide out in the wooded areas near streams and rivers and with its keen hearing and eyesight, it is a challenge to track down and capture. Hunters must use their tricks of the trade to lure their prey into the open. The primary method of doing so is to mimic the call of the hen in order to bring out the toms. This means that hunters must be familiar with the behaviors and calls of the Rio Grande, which, like the other subspecies, total 28, each of which has a different and distinct meaning. These calls include clucks, yelps, gobbles, purrs, rattles, and cackles.

The Rio Grande live in flocks, which tend to be larger in the winter. Mating usually begins once the length of day increases during the spring, although it is weather-dependent and can be delayed by cold spells or brought on earlier by warm spells. Hens prepare shallow nests in the ground, lining them with dead leaves. They keep these nests hidden and lay 10-12 eggs over a two-week period, at which time they incubate for about 28 days before hatching occurs. The males strut and gobble to attract the hens and to intimidate the other toms. In general, the hierarchy of the flock is determined by pecking order. 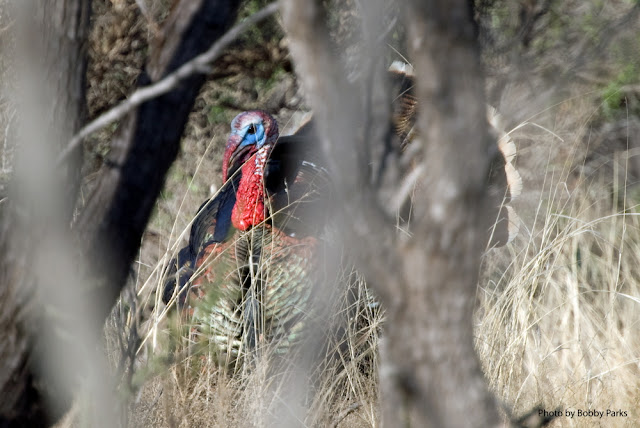