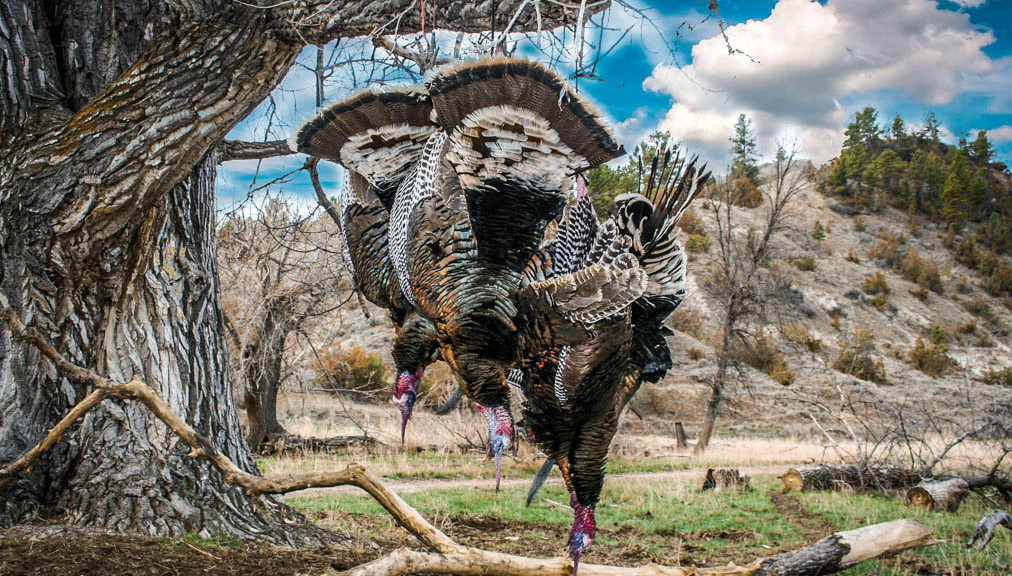 As much as I look forward to spring and the beginning of our Eastern turkey season, I get even more excited about my planned trips out west to hunt the Merriams turkey.

There’s no bird on the planet that I’ve heard that can compare with that thunderous gobble that our Eastern bird can pound out but when it comes to “looks” and a bird that “acts right”, the Merriams turkey is hard to beat. In my opinion not only are they the most beautiful bird aside from the Goulds, but they also inhabit the most gorgeous terrain. Maybe it’s that “you always like what you’re not used to thing”, I don’t know but I do know that once you’ve made a trip out to one of the western states and see and play with this bird, you’re going back.

I traveled out west 9 years ago thinking I’d just like to hunt this bird one time, and I’ve gone back every year since. I hunt both private and public land and added a couple states into the mix over the past few years. My dream would be to do a western tour each season hitting every state that the Merriams inhabits.

The lists of states these birds occupy is long and include South Dakota, North Dakota, Wyoming, Nebraska, Montana, Utah, Colorado, New Mexico, Washington, Idaho, and a few others. Terrain can vary but generally speaking this is beautiful country and what better way to see these places than actually walking on the ground and turkey hunting?

Generally these birds gobble a lot and will gobble later in the morning and more in the afternoon than our Eastern bird and they will come further to a call and cross what would normally be hang up features. If you’re an Eastern hunter, you’ll quickly adapt and be able to handle these birds. In fact, you’ll likely think you’ve died and gone to turkey hunter’s heaven.

Essential equipment includes binoculars, GPS and in my opinion a good high pitch raspy box call or crystal to cut through the wind and locate birds. Being in shape is a must as in many areas bird populations are sparse and it is a matter of covering lots of ground. Some regions involve high elevations and I can tell you from experience, this is hard to prepare for. You’ll want to travel as light as you can although a good vest is handy for storing layers as it may be snowing in the morning and warmer in the afternoon. A wind up to 20 mph are considered a breeze out west and does not hinder birds although higher winds may cause them to move into draws and valleys. You’ll find lone birds and bird pockets. What sometimes may sound like a jake at first (they gobble funny) is likely a gobbler. Run and gun hunters will love it as moving and flanking is a great way to hunt them and unlike an Eastern, you can chase him down from behind and often call him straight back down his back trail.

One method we’ve used during the late morning and mid day is to troll from a vehicle from remote roads. The first two years I would not do this but I learned that in areas where birds are sparse, you won’t last long trying to do it all on foot. The technic is simple and you ride and learn to spot potential areas to stop and call from. The key is to adopt the “Minute Man” mentality and have everything ready to go. You’ve got to be able to slip on your vest, grab and load your gun, and be headed towards the bird within 60 seconds because when you strike a bird he could be 500 yards away or just over the hill or in a draw and often will start towards you immediately. You’ve got to put some distance between the truck and a quickly found set up spot. Often the bird will sound off and you’ll locate him with binoculars at a distance at which point you chase him down or make a long move on him, set up, and then call. But again sometimes they’ll be in your lap within two minutes and the last thing you want to do is to bump into him when he’s’ coming in because you took too long to move or set up.

Locator calls such as crow calls or coyote calls can be very effective depending on where you are. Crow calls in particular are great at finding roosted birds at fly up time in one place I hunt. In fact a serious effort should be put into locating roosting birds especially out west and I’ve been luckier with dealing with these birds compared to Easterns straight off the limb.

Any bird can be tough under certain circumstances and hunting Merriams turkey can be as tough as any once they’re messed with or pressured which brings Eastern tactics back into play. A lot depends on where you’re hunting, the time of year, but mostly the pressure aspect. On private land or areas where they’re unpressured, my experience has been that you call more to these birds compared to Easterns but this can vary with regions as well. For example I’ve had birds gobble and come in from several hundred yards, cross a ravine / coulee that an Eastern bird would never have even thought about crossing and walk straight to me gobbling all the way. I’ve had birds that seemed to have a short attention span and if I stopped calling they walked away and only advanced if I called. I’ve also had a bird that took off running in the opposite direction the second I hit my box call. I know he had been hammered the week before and it was on public land. But, I moved to another area, killed two birds and moved again and my partner whacked another and in each case the birds were very cooperative.

The cost for these hunts varies but it doesn’t have to break the bank. You can go the outfitter route which has the benefit of accommodations, controlled and managed property, less pressured birds, and fewer question marks if researched or referred. But the public land route can be a great and more affordable option and only requires transportation, license, food, and accommodation cost. There is lots of public land and even Indian reservations in many areas that provide opportunity and all it takes is a little internet research. Either way incurs transportation and license cost. One way to look at it if you go the public land route is that the first year is as much of a scouting mission as it is a hunt. You may kill turkeys but you will learn and know more about the area for future trips.

If you’re looking to go as a group, planning to camp or hit multiple areas, driving may be an option to consider if you have the time but in some cases you’re talking about 20-30 hours or more one way. Flying in and a renting and SUV or 4 wheel drive truck is something to consider and my preference. I look for discounted airfares and rentals and plan accordingly.

The bottom line here is I’ve never taken or known anyone that hunted Merriams turkey that did not fall in love with both the bird and the country. It is an experience that all should know and if there’s a down side to it all aside from the cost; its when you’re done and headed back home, you know you’re going to have to tighten up, get serious, and get back in the tougher game of hunting your Easterns again.