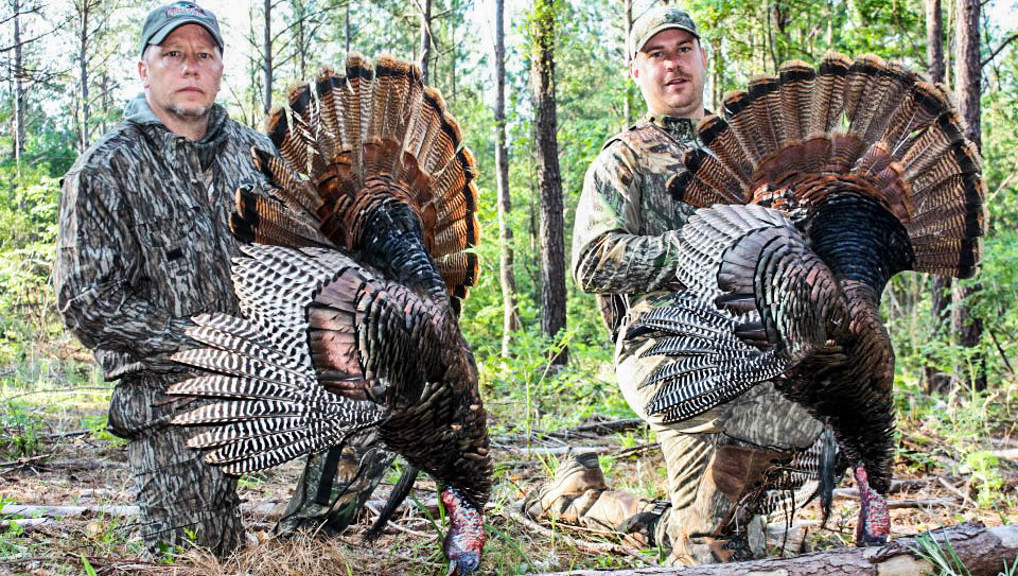 I can’t think of a better way to spend Cinco de Mayo than some late season turkey hunting in Georgia!  Can you?  Each member of our group was able to harvest a nice mature tom up until the last day of our hunt in middle Georgia where Roger and I doubled up on a pair of toms.

I leave work in Atlanta and fight my way through traffic to the destination just east of Macon.  The other guys were already in camp and were able to get in a hunt along with some scouting before I arrived. There wasn’t a lot going on in the woods on this particular day, which left everyone wondering how the weekends hunts would go. Regardless, we were there, and we were ready to pull the trigger on ole big beak.

That evening, we talked through the game plan over the cutting and yelping of a few “secret weapons” (We were going through Mike’s bag of turkey calls). It was just a nice evening of talking turkey. And the view – awesome. This was my first time meeting Eric, the owner of the place, and let me tell you, the dude KNOWs his deer hunting. Killing big deer in Middle GA is what he does best. In just the living room alone, he had ~15 bucks mounted that scored 130s to 170s. Amazing. 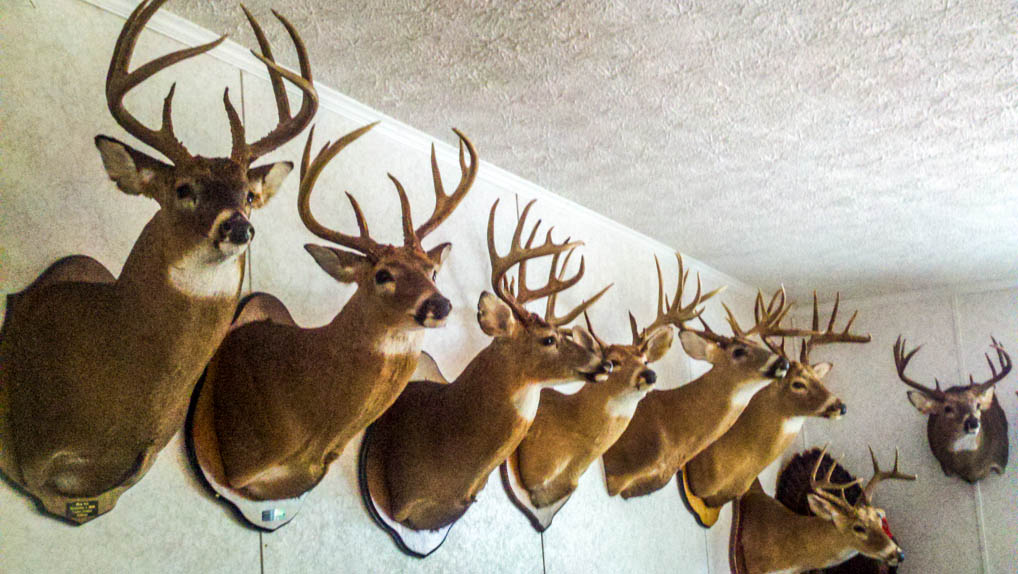 It was early Saturday morning that we received the text message from one of Mossy Oak’s finest, Mossy-Oak-Mike. He setup on a bird off the roost, and called him with his top secret (Hustlin Hen) box call – and SMOKED him. This was the 1st of 5 killed this weekend.

For the rest of us, the morning left us with a few distant gobbles, and after several miles behind us, we decided to head back for lunch and to regroup for the evenings hunt.

4 o’clock rolls around and we hit the woods after developing the strategy for the evenings hunt. Roger from Ronnie Smith Outdoors and Matt eased down a bottom, and Eric and I walked down into the same bottom maybe a mile down the road. This is where it gets crazy. Not 5 minutes after I split from Eric, I’m looking for a place to setup and – BOOM!  Loud shot close by – it was Eric. About the time he sat down a bird gobbled [Eric yelped] and the biggest middle Georgia gobbler of the weekend came in looking for the lady, and Eric SMOKED the 2nd bird of the hunt. He walked over to find me, and got my keys so he could head back home, and during the exchange – BOOM! Another shot. It was Matt this time. He and Roger had called in three toms that strolled in under the radar – and Matt laid-one-out! In 30 minutes we had two birds down. I stayed in the woods and worked a bird that was pretty much gobbling on his way to the roost. Based on the vocal birds in the area, we knew we’d be back in the a.m.

Sunday rolls around. Roger and I are the last two that need a bird. Our plan is to hit the same bottom with Matt on the camera and Roger and I as trigger men.  We worked our way down into the bottom early and setup where they’d heard some birds on Saturday. After a fly down cackle from Roger, we heard about 3 toms and a raspy hen. The gobblers were about 300 yards out in various directions.  It wasn’t long before we knew we had a bird to our left up on the hill, a couple out in front and maybe one to the right. Hens became vocal with lots of clucks, a few yelps, and one cackle. Four hens worked passed us heading for the tom up on the hillside. One of them with an 8″ beard.

The hour was action packed with lots of hens within 10 yards and gobblers sounding off in the distance. For a moment, our hopes were high as 2 or 3 toms sounded closer, but shut down moments later when a hen took them off in the opposite direction – so we thought. We all kind of looked at each other. Took off our masks and talked about our next move. Out of the blue, Matt scratched the ground, Roger yelped and [DOUBLE GOBBLE] straight in front of us at 100 yards. Moments later, I hear Roger behind me – “11 o’clock Grant.” I reply, “I don’t have them Roger.” It wasn’t long before they came in at a 1/2 strut at 40 yards. Both guns steady – I hear Roger, “let’em come on in.” And then the green light, “shoot’em, shoot’em.” BOOM! I drop the first tom in its tracks and the other one takes off to our right, Roger has a bead on him and K.Os him on the run.

At the end of our trip, all 5 hunters had a bird down, before we returned home to our families.  It always make for an enjoyable time when every hunter in camp harvests a bird.  Eric and Roger were generous enough to share a few of their honey holes with the Grand Slam Network, and its become somewhat of a tradition to head down to middle Georgia for some late season turkey hunting each Spring.