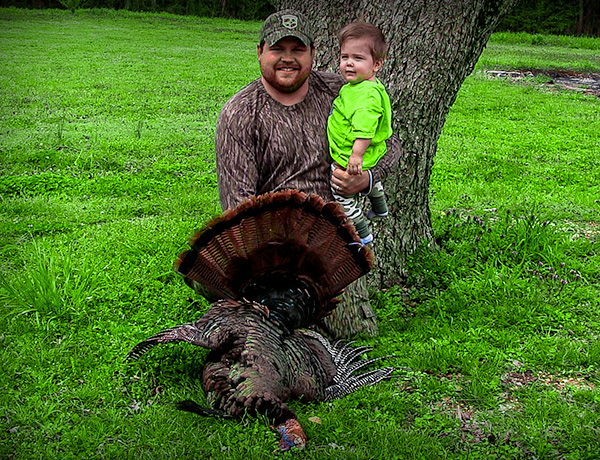 I have been asked many times what my favorite time of day to hunt turkeys is. I have thought long and hard about this and the best answer that I have been able to come up with is whenever I can go. Most would probably say that they prefer breaking daylight and setting up on a gobbler before fly down, and more often than not, that is my approach as well. I enjoy hearing the woods come alive at daybreak, but I know that I am no different than most, and because of work, family, and other obligations, my opportunities to hunt turkeys may come at other times of the day.

As far as times to get after turkeys goes, my advice would be to go whenever you can. If your schedule allows you to hunt mornings, then by all means go and break daylight with them. If you are doing family activities or anything else early in the morning and find some time to slip away during the middle of the day, try “running and gunning” an area that you know has turkeys by covering ground and trying to get a response. If your work schedule only allows for afternoon hunts, then get after them then. Later in the season here in Alabama, I have heard some of my best gobbling action late in the day. In my experiences with a turkey gobbling in the afternoon, if he is answering your call and appears to be interested, there is a good chance that you can seal the deal before fly up time. If that gobbler decides that he wants to come to you, then he knows that he has to get it done before he goes to roost, so definitely don’t pass up a chance to hunt turkeys in the evenings if that is your only time to go!

I have heard many guys complaining about not going hunting because it was raining. If you have ever been riding around and looking at fields and pastures during and shortly after a spring shower, then you have certainly seen hens and gobblers pecking around in the fields. Earlier this month I was driving home after work and it was pouring down rain. Every pasture that I passed seemed to have turkeys feeding in them. I rushed home and threw on my rain suit and rubber boots only to have my wife ask me if I was crazy enough to try to go hunting in that weather. I knew of a lease of mine just a few miles down the road from my house with a couple of food plots that turkeys frequented regularly. Based on the amount of turkeys that I had already seen in the fields on nearby properties, I thought that there would be a good chance of finding a gobbler before dark that afternoon. As luck would have it, the second field that I glassed had a lone gobbler feeding in the pouring down rain. A stealthy approach on my part, concealed by a downpour of raindrops onto the forest floor, allowed for me to get extremely close to the field without making my presence known. A few soft yelps later, the gobbler was interested and came my way to investigate what he had heard. A short time after that, I was toting him back to my truck with a grin from ear to ear and paying no attention to the soaking rain. I do not recommend going out in a thunderstorm, and will be the first to admit that lightning strikes will send me running to the truck, but I do suggest that if your only time to get after turkeys is during or shortly after a rain, then leave your fancy custom calls in the truck, throw a few mouth calls and maybe a waterproof friction call in your pocket, and head to the woods!

Depending on time of the season, weather conditions, turkey behavior/breeding cycle, and countless other factors that I have not began to understand, gobbling turkeys can be extremely unpredictable. You may go out to the “perfect “spot, with the “perfect” weather on what you think is the “perfect” morning, and you may not hear a gobble. On the other hand, you may go out when it’s extremely cold and conditions appear to be terrible and hear turkeys gobbling in every direction. You may go to a place and hear nothing but silence at daylight, but if you come back to that place midday or late afternoon, the gobblers may be answering every call. You may even go at all these different times and not hear any gobbling. Instead you may hear spitting and drumming, hens “talking,” or turkeys scratching that may give away their whereabouts. You may set up as a last resort thinking that all attempts have ended in failure, only to have a curious tom walk in silently and undetected until he is right down the end of your gun barrel. Turkeys are definitely unpredictable animals, but if you put in your time doing preseason scouting and hunting at whatever time of day that your schedule allows, the odds are bound to be in your favor at one point in time or another!