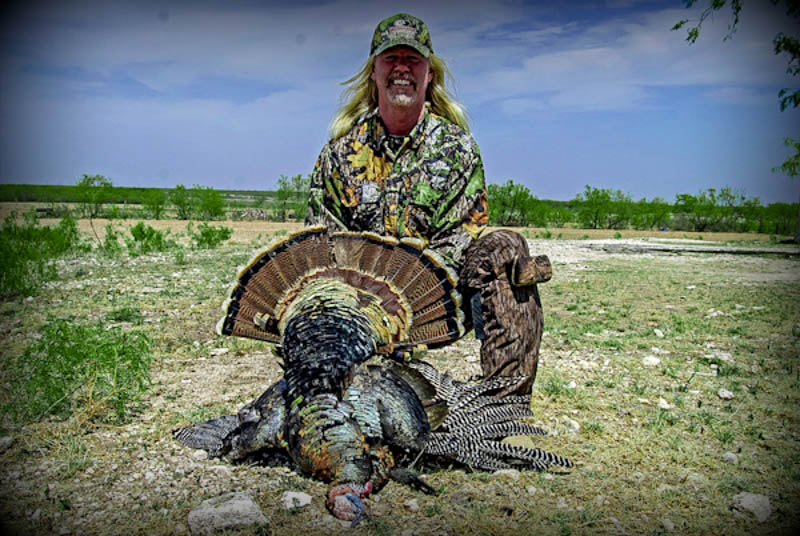 I’m sure everyone has confidence in their hunting and stalking abilities but I have to tell you based on a stalk I pulled off on a gobbler many years ago; I think it’s safe to say I’m in a league of my own when it comes to stealth and pulling off the improbable.

The scene was in San Angelo Texas and it was my third year hunting the same ranch. Two gobblers were included with the hunt with an option to take a 3rd and 4th for an extra bird fee. I got off to a quick start and took a bird on the first morning and another in the afternoon taking care of my first two tags. I didn’t want to quit hunting so I decided to pay the extra bird fee which at that point was $150.

The second morning I jumped in the rental car and drove to a detached property tract about 30 minutes away from the ranch and began my morning hunt. I parked and took off on what would be about a 30 minute walk to the power lines which is where I planned to kill my next bird. Yes in Texas turkeys roost on power poles as they provide the highest perch around. It’s quite a sight to see actually and at times they can be lined up like buzzards. If you’re doing afternoon scouting you learn to walk under the poles and look for droppings to determine which poles are being used and then it’s just a matter of backing up away far enough that you won’t mess up a roost area and start playing with the birds once they get down or when they’re headed back. I had done my homework and knew the routine. It paid off and I had my third Rio within a couple hours of fly down.

I gathered up the gobbler and began the long walk out. It was a hot day and after walking a while I decided I would lighten my load and ditch everything but my gun and drive back to pick up the bird. I tossed my vest and the bird on the side of the road and continued for a ways. A short time later I decided there was no reason to keep lugging my gun around so I laid it off to the side of the road as well and took off for the rental car. It was a haul but finally I made it to the car and the cooler with my water bottle.

As I was driving back I came around a curve and saw a gobbler in full strut 200-250 yards down a long straight away. He was in full strut and kept raising and lowering his fan and turning off to one side of the road and was putting on a big show. My binoculars were in my vest so I couldn’t get a good look at him or tell if he had other birds with him but I assumed he at least had hens. As I sat there watching him a little light bulb came on inside my head and I realized that my gun should be somewhere this side of him. The killer instinct resurfaced inside me and I decided if I could somehow pull off a stalk that involved first reaching my gun and then the bird……I’d pay the fourth bird fee. I knew it was a low percentage effort and I wasn’t even sure where I left my gun but it seemed like a good challenge to undertake so I decided to go for it.

I eased the door open and tried to make myself small, and then slid out of the car like a snake. I hadn’t crawled 10’ before I started taking hits from cactus or some unidentified objects but being the tough and determined predator I had become, I sucked it up and worked my way over to the brush and then took off running darting from cover to cover. I stayed away from the road for the first 100 yards and just plowed through whatever was in my way taking several mesquite and cactus hits for my trouble. I knew I was going to have to get the tweezers out when I got back to the ranch and maybe require surgery with all the hits I was taking but its amazing what you can take with adrenalin flowing throughout your body.

After I had gone what seemed like 150 yards I eased back out to the road and crawled over to peek around to find the bird and get my bearings. I caught a glimpse of movement and pulled back into the cover. To my relief the gobbler was still there strutting around and only 60-70 yards away. Now I began to worry whether my gun was on this side of him or beyond. I crouched down and duck walked staying back off the road trying to find the gun and just when I was starting to give up, I saw it laying just a few yards away.

I should point out that as good as lightweight loose leaf camouflage is for hiding, it’s not worth a crap when it comes to crawling on the ground in southwest Texas and I’m convinced it attracts prickly pear and thorns like a magnet. I started taking some serious hits right as I was getting to my gun but somehow managed to muffle my moans. I grabbed the Benelli and army crawled over to the edge of the road using a prickly pear bush as cover. My heart was racing as I was on edge of pulling off what was nothing less than a super stalk on this bird. As I tensely made my last couple of painful crawls and strained to peak down the road I caught a glimpse of a fan and movement.

We’ve all experienced what I would call “defining moments” as turkey hunters and as I lay there all stuck and bleeding with my gun raised and lined up on this gobbler, I knew I had just experienced one that would never be forgotten. The bird was right where I thought he’d be, just 25 yards away. In fact, he was right where I had left him lying after I had shot him the first time right beside my vest with the Texas wind lifting and lowering his fan.

I’m pretty sure that statistically speaking that percentages are in a hunters favor when stalking an already dead bird which is what this whole crazy episode had been about.

I realize this piece could easily be titled “Confessions of an Idiot” and if I had any sense at all I’d never acknowledge that this occurred. But here I am telling everyone that reads this all about it.

That said: its fun for me to look back and reflect on my earlier experiences as a turkey hunter. It’s obvious that I’ve had many less than glorious moments and this incident in Texas is just one of many.

I’m a wiser today compared to my earlier years in terms of how I go about things but I’m sure I could add a new paragraph each year.

The adventures, and learning experiences that we encounter through turkey hunting provides us all great memories and in my case many laughs and a fair amount of embarrassment. I’d like to think it’s not just me and I have to wonder how many of you shared similar experiences but you’re just smart enough not to admit it.