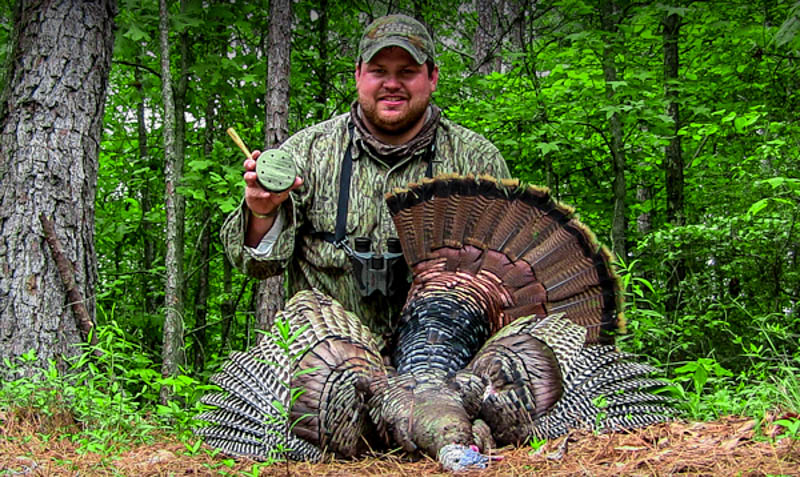 I will be the first to admit that I was skeptical of the aluminum and other high frequency friction calling surfaces for a long time. High frequency turkey calls are calls that are able to produce the natural sounds of the wild turkey at a louder and much higher pitched level than a traditional call. About fifteen years ago, one call company that had previously been making my favorite friction call in the conventional glass, slate, and crystal surfaces began making calls with aluminum and even ceramic surfaces. I was very hesitant to try these calls for a while and thought that they were just another gimmick to try to sell more products. Seven or eight years ago, a good friend of mine that has been very successful both in the turkey woods and on the competition stage told me how well these calls were working to call in the tough Alabama Eastern gobblers that we had always hunted. After finally buying and running one myself, I no longer step into the woods on a Spring morning in pursuit of a gobbling tom or walk onto a stage for a calling competition without an aluminum friction call by my side.

Today you can purchase an assortment of calls of higher pitch or frequency than a traditional glass or slate call is able to produce. Many companies now make friction calls that combine a crystal or aluminum calling surface over a walnut or cherry pot. You can also find an assortment of box calls that combine cherry or cedar wood boxes with exotic wood lids that are very capable of reaching the higher notes that is often necessary to locate a wary tom. Personally, I keep a Zink Calls Thunder Ridge Series aluminum pot style call and an all cherry wood box call in my vest to achieve these sounds. The combination of striker and call can really intensify the sound that these calls can make when matched properly. I have found that purpleheart or hickory two piece strikers and laminated oak or birch flaretip one piece strikers can really reach a high pitch when paired with the right crystal or aluminum surface. To condition these surfaces, a scotch brite pad works best on an aluminum call and a conditioning stone is my preference for the crystal pot.

Most of my success with these high frequency calls comes from mid-morning to late afternoon. I start my morning off like most hunters, either waiting for a tom to gobble on his own or by blowing an owl hooter or other locator call to pin point his whereabouts. After that, I try to move in as close as possible without spooking the bird and setup in an attempt to trick him into coming my way. If my morning battle with the gobblers does not end successfully, I begin covering ground and using the high frequency friction calls. I prefer to walk the logging roads or ridges, which more often than not in my hunting grounds of West Alabama are covered in plantation pines or are cutovers from some phase of the logging process. During these walks, I frequently stop to yelp in areas where I have either planted food plots, seen turkeys, found sign while scouting, or in areas that will carry the sound of my calling as far as possible. I start out by clucking on the Zink Calls Thunder Ridge Aluminum pot call and I begin calling fairly soft and quiet. I do this because I have always been told that you can always call louder to try to make a gobbler hear you, but you can never get a chance to call softer to a gobbler that you cut and cackled to and scared off that was just over the next ridge. If my initial soft clucks and yelps don’t coax him into a gobble, I will get more aggressive with my clucks and yelps on the aluminum pot while gradually getting louder and putting more emotion into the calling. The clucks and yelps often transition into excited yelping or a series of cuts that often shocks a gobbler into letting you know his position. I have stood on the same ridge and done two or three renditions of this five to ten minutes apart before finally getting a gobble. This whole process often starts out mid morning and goes well into the afternoon if I have a large enough tract of land to cover or if I know turkeys are in the area. These sounds are not limited to the aluminum pot call, and I will often mix it up and make the same calls on a cherry box shortly after running the aluminum call. This sound simulates several hens communicating back and forth which can often coerce a gobble from a tight lipped tom. Once I do get an answer, I do not back off with the intensity of my calling until I know the gobbler is headed my way, and even then, I probably push the limits with the aggressiveness of my calling. I love to hear them gobble, which I know you can make them do too much at times, but this is why I call harder and louder to toms in this situation. More often than not, if you have a mid-morning to late afternoon bird answering you, then his gobbles are just as aggressive as your calling and if your cards are played right, you often get a chance to close the deal! I use a modified version of this tactic for late afternoon toms. If I do not have a gobbler pinpointed, then I will go to an area where I know birds were during the morning or where they frequent in the afternoons. I will often set up a lone hen looker decoy prior to starting my series of calls, and my decoy of preference is from the Avian X line of turkey decoys. I will start off calling softly just like it was breaking daylight. I will switch from soft yelps to clucks and purrs, all the while, scratching in the leaves trying to sound like feeding turkeys. This soft calling that starts out on a Zink Calls two reed mouth call, eventually turns into the loud and aggressive calling on the high frequency aluminum pot or cherry box calls if have not gotten a response during the first half hour of my setup. Just like midday hunting, if I get a response from a gobbler, I keep pouring the calling to him trying to keep him excited enough to come my way in time to bag the bird before he flies up onto the limb.

The situations, setups, and calling styles mentioned are definitely not ideal for every situation, or every hunter for that matter, but I have found that they have worked for me over the last few years from Florida to Tennessee to Texas, and everywhere in between. High frequency turkey calls definitely bring a new element to calling and hunting situations, and they add one more weapon to your arsenal of tactics that you can try on tight lipped gobblers. If you are like me, you are willing to try anything that it takes in an attempt to tricking a gobbler to commit to your setup, and I hope that by reading this, you have either added one more tool to your tool belt or at least been mildly entertained. If you are going to try this tactic and are not yet equipped with the right gear, then I would definitely give the high frequency friction calls manufactured by Zink Calls and the lifelike and portable Avian X Decoys a try this turkey season.