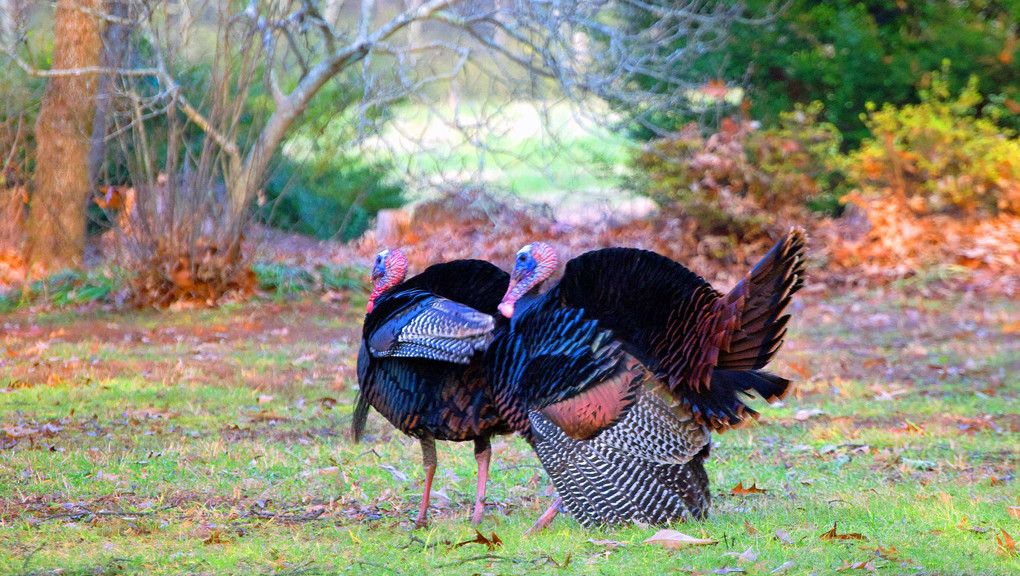 As I sat against a tree listening to the hens still on the limb 60 yards away, I strained to hear that first gobble. I was hearing lots of tree talk from the hens but so far not the gobbler music I was hoping for.  It was opening day of the 2010 Georgia season and I was hunting an 80 acre property bordered by the Etowah River in North Georgia. I had watched this flock of hens the evening before and knew where they were roosted.  I didn’t believe a gobbler was in the group but I hoped maybe one was nearby that I hadn’t seen.

The truth is, I had not heard a gobble on the property leading up to the start of the season and didn’t know for sure if any gobblers were even around. I knew that opening weekend would be my best chance on this tract if birds were there because another person would be hunting this same property later and someone hunted across the river. Although I had planned a few travel hunts,  I had not secured any other property in my home state so not only was this my only hunting option for opening weekend, but possibly for the season in Georgia.

After fifteen minutes of listening to the hens, I heard wings flapping and caught glimpses of birds coming down out of the trees. It appeared to be 10 or so hens most of which were landing on the end of the ridge I was on. I could see some of them but mostly just caught movement. Moments after the last bird landed I thought I heard a distant gobble. The hens were making such a fuss it was difficult to hear, but I finally heard gobbles again. It came from a long ways off but there was no mistaking the sound. I had already concluded that no gobblers were with the birds near me so I was anxious to get up and go after him. But, I didn’t want to spook the birds in front of me, so I stayed put until they dropped down over the edge and out of sight.

As soon as the last head disappeared I rolled left, crawled back a few yards, dropped over the ridge, and started “fast walking” to skirt the birds. Once I hit an old logging road and knew I had cleared the hens I took off at a run towards the river. A couple hundred yards later I worked my way up over a rise and stopped to listen. I was out of breath couldn’t hear anything over my own gasping at first but then heard the gobbles again. It was closer now and it sounded like more than one bird.

I hurried across the hill but as I topped it, I could see the river and realized the birds were on the other side and off my tract of land. My heart sank for a few seconds knowing I couldn’t get to them although I was glad to know there were at least gobblers around. I decided to work my way down the hill and then try and figure out what to do. They were 200 yards away from my hill top position but the hill I was on was steep with open hardwoods so I was worried they might spot my movement. I kept trees lined up between them and me as best I could and five minutes later I had worked my way down to the logging road that ran along my side of the river.

The river was 50 yards wide and I could see the birds 80 yards away from the far bank, out in an open field. There were 2 gobblers, a jake, and a few hens. The jake was pestering the gobblers and they kept chasing him off from the hens. He must not have known the hierarchy rules because he was a persistent rascal and would turn around and walk right back to them only to be chased again.

I watched them through binoculars and then yelped on a box call. They were hot and gobbled right back at me. I hit the call a couple more times getting the same response. One of the gobblers started moving towards me but the hens kept slowly easing forward maintaining the 80 yard buffer from the bank and he hooked back to them.  I continued to ease down the road trying to come up with an idea but not seeing a way to break the stalemate.  This went on for another  100 yards before I saw an opening from the river on my side and remembered seeing turkey tracks there indicating it might be a spot they flew across. It was a 30’ wide slot clear of trees and foliage and there was a clearing on the opposite bank as well. I moved down within 20 yards of it and let them work down their side a little further.

I knew yelping wasn’t going to be effective so I pulled out a slate call and began to aggressively do the fighting purrs call. This turkey calling tactic has worked well in the past in various scenarios and it seemed like my only shot at the moment. As soon as I started calling the birds went ballistic and the jake turned and starting walking towards the river. I continued working the striker hard and fast over the slate as the jake continued my way now 30 yards from the group. One of the gobblers broke and started following the jake and a few seconds later the second gobbler broke loose as well. My new buddy Jake kept coming with his gobbling entourage in tow. In fact, the gobblers seemed to speed up which caused my “Hope Meter” to start rising. Once the jake got within 15 yards of the bank he ran a few steps and lifted off heading straight for my opening only 20 yards away from me. God bless fighting purrs and stupid jakes!

Once the leading gobbler saw the jake take to the air, he lifted off still 30 yards out in the field headed across the river! I dropped the call and snatched my shotgun up and faced the opening down the logging road. The jake landed 20 yards away and ran a few steps after touch down with the first gobbler landing in his footsteps. The gobbler ran a few steps off to the right of the road and stopped at which point my gun went off and he dropped. I didn’t know what the other gobbler had done but that answer came a few seconds later when he touched down in their established landing path. At first I wasn’t going to shoot him because I normally just take one bird if more than one comes in. But, my mind was racing, and he just kept standing there. I decided this might be my only other chance if others hunted the property so I talked myself into taking him.

The event was surreal and I could not believe what had just transpired. As I watched one of the birds flopping I noticed there wasn’t a choke tube in my gun and realized I’d forgotten to put it back in after taking the modified out after my last dove shoot. That was a first and I guess it’s a good thing they were close because who knows what kind of pattern I was spraying out. I was elated and felt bad at the same time for taking the other bird and hoped that the threads inside my barrel weren’t messed up. But as I walked out carrying one bird in my vest and the other over my shoulder thinking about what just happened, I began to feel fine with it because I knew that they may be the only two Eastern birds I’d have  a chance at that season. And the unexpected adventure that brought them into range would be one I’d never forget.

I have used fighting purrs with mixed results prior to that day and since. In this case it worked really well and the jakes response was the key. I don’t know if the gobblers would have come if not for him but my guess is they couldn’t stand to let him come over to see me and it cost them.  On most days I can’t get them over a ditch or across a fence so I would never have expected to coax birds across a river that wide. But once you see something like this happen, you realize anything’s possible.

Fighting purrs have helped me get birds to come into range when nothing else would with many hunts that stand out in my mind. I used it the first time successfully in Texas 11 years ago when I had three gobblers and several hens that started walking away from me. When I turned loose with fighting purrs all three gobblers turned and came 120 yards down a power line straight to me. In Jones County I had two gobblers and a group of hens at the far end of a pasture that wouldn’t budge for 30 minutes but as soon as I hit the fighting purrs, the entire group came running right to me.  My dad and I got a gobbler to come to us one morning on a hunt when nothing else we tried would separate him from his hens.  Wesley Phelps and I did the fighting purrs in New Mexico when there was no doubt the group was leaving us and it turned a couple of gobblers around bringing them in at which point Wesley greeted one with a load of Hevi Shot. In South Georgia I coaxed a gobbler with a 12” beard far enough in my direction from across a field to get him in range. The call has worked on other occasions as well. It’s even worked for short tugs to coax a gobbler over 20 yards when he would not otherwise move at all. But those 20 yards have made the difference more than once when it comes to getting the gobbler in range.

Fighting purrs is still more of a last resort call for me but an option I have confidence in. It absolutely can work and on those occasions that nothing else does, you have little to lose by trying it. For me it seems to work better earlier in the season than later. Mixing wing flaps into the mix as well or having two hunters perform the sequence together can be effective. But it is definitely something you can do by yourself successfully.

On that morning in 2010 on the Etowah River, when my chance of success seemed slim, it turned out to be a day when fighting purrs worked really well.

Discuss this article on the forum