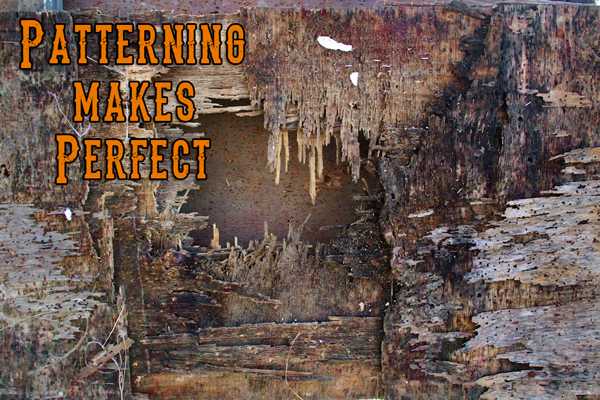 Every Spring, turkey hunters breakout their best turkey hunting shotgun to check the pattern and make sure things are in working order.  Patterning a shotgun for turkey hunting is as much necessary as it is fun – you need to be confident in your gun and its effective range.  As Jamey explains, modern turkey loads like the new heavier-than-lead (HTL) turkey shotgun loads are more expensive than their lead counterparts.  However, do your homework, and the results will show the best turkey shotgun patterns are found in the HTL loads due to the higher shot count and thier resistance to flyers.  For these reasons, I shoot HTL turkey loads out of my shotgun! – Grant

In recent years many turkey hunters have decided to make the switch from shooting lead shot to one of the heavier-than-lead alternatives in their best turkey hunting shotgun. Others are wondering “what’s the big deal and why would anyone want to quit shooting turkeys with good old lead 5’s?” Well at some point everyone who made the switch has asked that question as well so it seems that this would be a good topic to look at a little deeper.

The decision to switch has been easy for some and difficult for others, myself included, and it could do us all some good to take a look at some factors that could contribute us to making that decision.

Lead shot has been around for a long time and has been the standard shot used for most small game hunting for everything from doves, quail, rabbits and squirrels and even larger game such as geese and turkeys. Lead shot is reasonably inexpensive and readily available in most sporting goods outlets and with its heavy weight it has proven to be an excellent shot material…it does however have some problems. Several years ago lead shot was outlawed for waterfowl hunting when it was discovered that the excess shot was being ingested by waterfowl while they were feeding and ultimately was causing damage to the breeding success of waterfowl. Its standard non-toxic replacement has been steel shot which is harder and considerably lighter than lead which therefore means it can’t be shot safely through some older shotguns and has a lesser killing range.

Ever since steel shot came on the market, there has been an effort to develop better alternatives which would perform as good as or better than lead and still be non-toxic to waterfowl and over time we have seen shot such as Bismuth, Hevi-Shot, Federal Heavy Weight, and Tungsten (commonly called TSS) come onto the market. Several of these have proven to be deadly in turkey hunting loads as well.

Steel shot weighs about 7.5 grams per cubic centimeter (g/cc) and is harder than lead.

Lead shot weighs about 10.6 g/cc and is a relatively soft metal, deforms easily and is reasonably gentle on a gun barrel.

Hevi-Shot weighs about 12 g/cc and is a mixture of tungsten, nickel and steel and is a much harder metal than lead. It can damage the inside of the barrel of a shotgun and therefore must be loaded with thicker shot wads for more barrel protection.

Hevi-13 weighs about 13g/cc but is otherwise similar to regular Hevi-Shot.

Federal Heavy Weight weighs about 15.2 g/cc and has a higher percentage of tungsten in the metal which makes it heavier than the previously mentioned materials.

TSS weighs about 18 g/cc and has the highest percentage of tungsten of any shot available today and is therefore the heaviest shot currently available. It is an extremely hard material and requires even more precautions than the others to protect the shotgun from damage.

Loaded properly, any of these materials can be used for many years of turkey hunting without causing any shotgun damage.

It is generally accepted that steel shot should not be used for turkey hunting.

Lead shot has proven to be a good turkey load and the most common shot size is probably #5. This shot size has enough energy and penetration to kill a turkey cleanly out beyond 30 yards as long as the pattern density is adequate.

Hevi-Shot #6 performs a little better than a lead # 5 and since the pellets are smaller it is possible to have more of them in the shell which makes the pattern denser as well.

Hevi-13 #7 performs about the same as lead #5 and Hevi-Shot #6. Smaller shot again allows it to have a denser pattern than the previously mentioned loads.

Federal HW #7 pellets perform even better still and if it were available in #8 shot it would actually be similar to those mentioned above. The Federal shell however uses an unusual shot wad that many shotguns do not shoot well. This shell/wad requires a more open choke and works best with non-ported chokes. Some shotguns will shoot this shell wonderfully while others never seem to work well with it.

TSS #9 performs similar or better than all of the previous shells mentioned and with the extremely small shot size it is possible to shoot extremely dense patterns out to 40 yds and beyond.

Let’s face it, to kill a turkey with a shotgun two things are necessary; a dense enough pattern to place shot pellets in the “kill zone” of the head and neck, and pellets that carry enough energy to penetrate bone and into the vitals once they arrive on target.

With all other factors being equal, hard shot pellets will pattern more evenly than softer pellets due to the soft material being more easily deformed under the intense pressure it undergoes when the shot is fired. This is caused both by the initial compression on combustion and also by the shot being squeezed as it passes through the choke. When a pellet deforms it tends to fly erratically rather than straight and this can cause “flyers” and also cause the pattern to “open up” quickly as it travels downrange. Harder shot patterns open up also but at a lesser rate.

Pellet energy can be determined by formulas but it boils down to a combination of pellet weight and speed.

Penetration is based on energy but also takes into consideration pellet diameter. As an example, if you were to take a pencil and “stab” yourself with the eraser end and then do the same thing using the same force with the pointed end, which end do you think would penetrate deeper? It is not too difficult to see that a small pellet will penetrate better than a larger one even if they both have the exact same amount of energy.

Since speed plays an important factor in energy it should also be pointed out that a large lead pellet and a small tungsten pellet that may have equal energy as they leave the shotgun will not still have equal energy at 40 yds due to the fact that the larger pellet has more wind resistance and slows down more quickly than the smaller pellet. This can be demonstrated by throwing a BB and a ping-pong ball together and see which one slows down the quickest as they travel.

It is no surprise that once we go higher up the ladder than lead shot, we also go up in cost. I recently priced some 12ga turkey loads in lead, Hevi-shot, Hevi-13, Federal HW and TSS and here are the results with the prices averaged from several retailers.

The last two are my actual costs for loading my TSS shells with no labor cost applied.

As you can see, other than with the lead shot, the cost per turkey shell really is pretty equal overall and I am spending about the same to kill a turkey with my little 20ga as others would to kill him with a big 12ga shotgun.

I have heard folks often state that the reason they keep shooting lead at turkeys is because of the cost. I submit to you that although I spend more money than I care to admit hunting the wild turkey, the amount I spend on my ammo doesn’t even scratch the surface of the overall expense. In fact my shell cost is likely one of my lowest expenses in turkey hunting and I can’t see any reason shell cost alone should cause someone to continue shooting lead.

Each of the pellets discussed, from lead to TSS, will kill turkeys within their limits and it is not my intention to convince anyone to switch loads but rather to better understand the differences between pellets so you can make an educated decision when choosing your turkey ammunition.

Ultimately I believe we as turkey hunters have an obligation to do everything in our power to cleanly kill every turkey we shoot at without wounding him and letting him get away to die later. No matter which type of load you choose I encourage you to practice shooting and pattern your gun so that you know exactly what it is capable of and then hunt within that capability.

Remember, a good rule to follow is to not shoot at a turkey further than your gun can reliably put 100 pellets inside a 10″ circle. That may be 30 yards for some and 45 for others but you won’t know unless you pattern your gun.
For reference, my 20ga consistently places 170 pellets in a 10″ circle at 40 yards using Federal HW #7 shells and 300+ using my TSS #9 hand loads. I get well fewer than 100 using lead #5 and my acceptable range using lead would be only around 25 yards but that is why I don’t hunt with lead.

Please note that some states have outdated laws that are based on lead shot and restrict turkey hunting to size 7 shot or even larger so you should consider that before heading out to hunt with TSS 9 shells.

Discuss the article on the forum